Skip to main content
Past the few weeks or rather months, I’ve been stuck in a total plot hole with my book 3, trying to figure out if the body count needs to be increased or something else needs to happen. So, I needed something somewhat lighter fare to read. Still a mystery but, a cozy type.

For Batter or Worse by Jenn McKinley

in a way it’s rather funny that I’d read about cupcakes as they’re not one of my favorite edibles. Frankly, not fan of them at all, too sweet for my taste.
However, I’ve read all the previous one’s this series. They’re cozy mysteries, but they’ve been pretty solid reads, so I decided to give this one a go. The books are about three friends who run a cupcake bakery in Arizona. And all the books come with recipes too. I’ve never tried them, as I mentioned, cupcakes are not my thing. 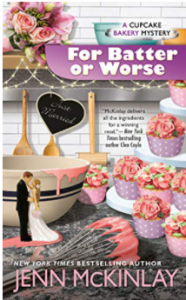 ️ It was ok.
In this latest one, #13 in Cupcake Bakery Mystery series, the owner and main baker, Melanie, is finally getting married to Joe who is one of the brothers of her best friend. A nasty chef in a resort hotel where Mel and Joe’s wedding is going to take place is found dead, and one of the cupcake bakery’s former employees is now under suspicion for it. I’ve liked the series, but this one was not the author’s best effort. The characters in the hotel were rather one-dimensional. I also figured it out pretty quickly who did it. The murder method though, was very inventive to say the least.