What happens when your past catches up with you? If what you did years ago, shows up now? 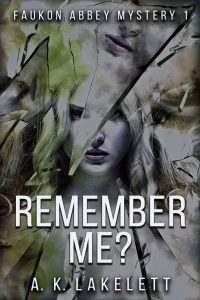 A traditional detective story, a classic whodunit, written in a bit different format. A gripping tale about deep hidden secrets of so-called love, set in a small town of Faukon Abbey near Exeter, in Devon, England.

A seemingly ordinary man is found dead in Tersel Woods, with no identification, not even a mobile phone. Who was he? And who wanted him dead and why? Faukon Abbey CID officers, DI Greene and DC Ford and their friend Carter, a journalist at the Abbey Chronicle work hard to uncover all hidden tragedies, murder being just one. They find out what really happens behind the elegant facades – where crimes go unseen and unreported because they don’t happen to people like us – – Or do they?

“As with the best of crime novels, Remember Me proves a tense and compelling debut as A K Lakelett takes a tried and tested formula and adds her own impressive twist. Creating something innovative in such a popular genre is no mean feat and here she shares her story as a play, cutting between action scenes and chorus. – Remember Me is definitely recommended!” BookViral

“All is not as it seems. – Set in the present day, there is a murder, which is investigated by the police on one hand and a local journalist on the other. The idea of writing a modern book based on the ancient Greek plays with a chorus, and action from two different viewpoints is intriguing and innovative. The chorus is that of the murderer, whose identity is revealed at the end.” Readers Favorite

Find out more about Faukon Abbey in the second book, “Missing Alibi” in which an author is found dead.

Remember Me? is available on:

If you order from the BookDepository, it ships for free anywhere in the world!

A paperback version is also available at these, and other online booksellers:

Thank you for taking time to read my books. If you enjoyed them, please consider telling your friends and posting a short review on Amazon and/or Goodreads. Word-of-mouth referrals are an author’s best friend and much appreciated. Thank you!