“The Nighthawks” by Elly Griffiths 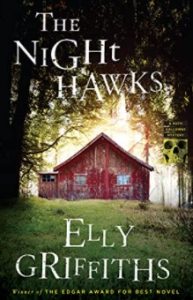 This is book 13 in the Ruth Galloway series. Ruth is back at the University of North Norfolk. A group of guys searching buried treasures with metal detectors on the beach in North Norfolk when they find a recently deceased body. Nelson initially thinks the body could belong to an asylum seeker, but it turns out to be a local boy, Jem, instead.  It seems the boy could have accidentally drowned. But when two more dead bodies are found, things get very complicated, suggesting murder.

I’ve read all ruth Galloway books and I liked them all.  This one, I think, is the best so far. The previous book, The Lantern Men, was perhaps a bit weak, but with the Nighthawks Ruth is back in business. She has been promoted and is now the head of the department, with her own corner office and a coffee machine. She has hired a new lecturer to take over her old job.

But people are not what they seem, and everybody seems to have a lot to hide. There are the Nighthawks, the group of men searching for Viking treasures and Bronze Age coins on the beach, instead they find a body. A dead couple found in an old very creepy house, and the new lecturer Ruth just hired seems to be a bit too friendly.  I couldn’t figure out the killer, nor the motive, and the twists in the end were totally surprising.