Murder and Medling by Ovidia Yu 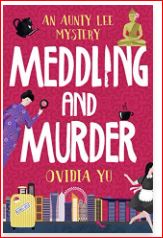 If you haven’t read Ovidia Yu’s Singapore Mysteries, you’re missing out, methinks. They’re good ones for a few hours of armchair travel to a different part of the world.
They’re lighter mysteries, with Rosie Lee solving crimes in Singapore. She’s the chef and the owner of a restaurant in Singapore, an opinionated lady of certain age, with a lovely Filippino maid Nina as sidekick. You learn quite a bit about food and life in Singapore, which is a wonderful city where I’d love to go for a visit again.
My review: ⭐⭐⭐ 1/2
I just finished the latest in the series, Meddling and Murder (#4) where Aunty Lee (as Rosie Lee is known), is having issues with Nina who, Aunty thinks, should marry a detective. Nina, doesn’t want to, and Aunty lends her out to a sister of a friend whose own maid’s gone missing. A couple of murders later, Aunty manages save Nina and find out the killer, just in time.
I give this one 3.5 stars, it should get 4, as the story is pretty good, but in this book there’s an issue with lack of indication who is talking to who and where. Towards the end one has to read carefully to keep up. I didn’t figure out the guilty party until near the end, but the end was still a nice surprise.
While you can read this one as a standalone, you’re better off starting from the first of the series, Aunty Lee’s Delights.  You’ll get to know the characters better and get a feel for the place too.