Review of the last Montalbano books, The Cook of the Halcyon and Riccardino

Admission, I’ve read all Montalbano books by Andrea Camilleri. And watched the TV-series. Most of the books have been excellent and the TV series has made them alive. Those of you who haven’t read them/watched them yet, you really should.

The two last books are a bit different. The Cook of the Halcyon was apparently written for TV and then it became a book instead. Riccardino was written already 2004, as Mr. Camilleri wanted the series to end his way. When he lived longer than he expected to, he updated it later.

The Cook of the Halcyon by Andrea Camilleri 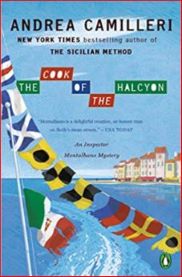 This is the next to last book, #27. The title is a bit odd. Halcyon is actually a huge yacht, a pleasure boat, Montalbano sees in the harbor, and he gets interested in it as they are loading an awful lot of pricy food on it, good wines and other drinks too. Then he sees a beautiful woman, who he had seen earlier boarding the boat and plot thickens. Throw in a murder or two, an American and even FBI in need of help, and things get complicated, very fast.

This wasn’t the best of the Montalbano books, I’m sad to say. It’s rather different. As mentioned, it was originally written for TV. It’s still pretty good, plenty of murders and action and the ending was a surprise. But it was lacking the usual Montalbano flair of plotting and character, it read a bit more like an action thriller type which would have likely been great on TV but as a book it lacked nuance and sometimes it goes rather over the top. 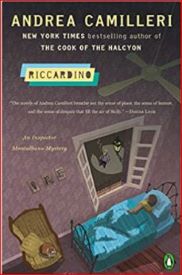 This is the last book in Montalbano series, the final episode, #28. It was written well before Andrea Camilleri died. He sent it to his publisher saying to keep it in the drawer and publish it after his death.
The book starts with Montalbano receiving a call. Not as usual by Catarella but from someone named Riccardino who asks him when he’s going to show up. Montalbano who doesn’t like being woken up early in the morning, says, 10 minutes and hangs up. Clearly it was someone who had dialed a wrong number. Soon later, Montalbano gets another call, about a murder, someone had been shot right infront of his friends. And off we go, the usual Montalbano style.

The book starts the usual Montalbano fashion, he visits the site of the murder, he starts to interview people, but he’s not supposed to handle the case. It’s going to be handled by an upstart from the Flying Squad instead! Montalbano gets a visitor, a fortune teller, who wants to report a strange case of a truck driver leaving packages in an odd place. Montalbano sets out to investigate but then he gets the murder case back because of the bishop insists on it. To complicate matters further, the Author enters in the book complaining that Montalbano isn’t handling things well and may not be up to the job any longer. The “real” Montalbano feels he’s losing to TV Montalbano, that he’s losing the plot and he’s not happy about it.

This book is written a bit differently for sure. Adding the Author in the story makes it rather multilevel in a way. I’m two minds about it whether it’s good or bad. Mostly it works, as Camilleri is a good writer, and the basic story is still classic Montalbano. The ending was very unexpected. It’s an enjoyable read, and a sad read. I’m really sad that the series has come to an end. RIP Mr. Camilleri, RIP Montalbano.