Skip to main content
Do you ever get in a book-rut? I’ve been into one for a while now. I’ve recently read 4 or 5 books, by authors I’ve liked before. These have been books number 15 to 20 in their respective series. And I’ve been rather disappointed by each one of them. The latest disappointment was a mix of a travel brochure and romance except it was supposed to be a mystery. Granted a cozy one but when every other page describes how hunky the husband is, and how hunky the other guys who pop up are, it was wearing me out. And then getting recipes in a book where the main character barely knows how to boil an egg. I mean really! And unfortunately, the plot was very weak too and whodunnit was clear just about a mile away.

The other equally recent one was more like a travel book as well. While it’s nice to read about a place I haven’t visited for eons, it had just way too many detailed descriptions about the place, it’s history and clothing, and those got repeated multiple times. There was too little of the actual mystery. And even with this one, I figured it out halfway through. So no fun! And no, not naming these books as when it comes to reading and taste, we all have our own.

I only post reviews of books I like.
But I’m happy to note that I just got out of that rut by a good one. “The Death of Mrs Westaway” is a good mystery, not stellar, but a good one. I’ve read a couple of Ruth Ware’s books before and liked them. Solid mysteries for the most part.

“The Death of Mrs Westaway” by Ruth Ware

This story is about a hard-down on her luck young woman who recently had lost her mother. An intriguing letter from a solicitor arrives, telling her that she’s been mentioned in a testament by her grandmother. It’s just that she thinks the letter was not meant for her. But she decides to go to the funeral anyway. The story is set in Brighton, Penzance and Cornwall in general. 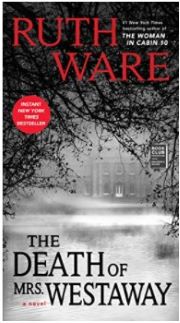 The start is very good, plenty of suspense. The main character, Hal, is a likeable person, who after reading tarot cards decides to spend the money she doesn’t really have to go to the funeral, just to get away from Brighton. She hops on a train and travels to Penzance.
I liked the characters, most of them came across as real people. The plot was rather good, the flash backs blended in nicely and gave a good idea where the story was going.
The story is a slight take on “Rebecca”, not as gothic or scary.  I figured it out whodunit about halfway through, but it was interesting enough to keep reading to the end to see if I was right as well as find out the motive.
I didn’t like the ending much, it required suspending belief quite a bit, and motives of the title character were left pretty unclear. Not everything was tied together either, a few lose ends left hanging.
But all and all pretty good read which I can recommend.