“The Sleeping Dictionary” by Sujata Massey

This one is not really my typical read. It’s a history set in India starting in 1930ies and ending with the Independence 1947. A story about a girl who is the only survivor of a flooding which took her entire family in Bengali village. She survives through hardships and finds a new life in Calcutta. 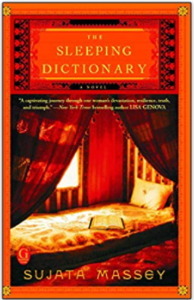 The start is good, describing how the girl survived the flood by climbing up on a tree and staying there until rescued. Her luck changes to the better, she gets to school for the Anglos, but of course not as a student but as a servant. She gets lucky again, meeting another Bengali girl, who she gets to help. By then the orphan girl has learned good English. But again, bad luck comes her way, and she has to flee to survive. More bad luck until she manages to get a steady position working in Calcutta and love finally comes her way.
The story is interesting as it’s set in a part of the world of which I have very limited knowledge. The historical aspect made it worth reading too. It slowed a bit in the middle, got a bit repetitive, but it managed to hold my interest to the end. I liked it.  The same author apparently writes mysteries as well. I think I’ll check those out.